The Day of Buoyant Optimism

I had been dreading this stage from the moment I signed up for 8 Bridges.  I knew it was called “the beast” and I knew it had taken down many strong swimmers before me.  I was nervous for this fight.  When we got to  the marina things moved pretty fast and we were on our way to the bear mountain  bridge.  The sun came out, conditions seemed good.  I was still terrified.  Until I got in the water, felt it and started swimming, I was not going to be able to relax. 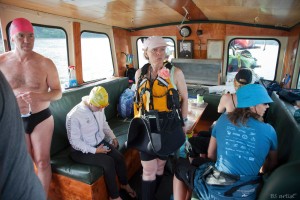 Readying myself with Margrethe

It was time to jump in and I remember thinking, “good-bye boat,  good-bye crew  members.  I can’t wait to see you soon.” But I had no idea what soon meant.  Good conditions, 7 hours?  Bad conditions 8 or 9? 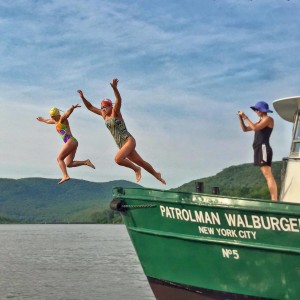 Anna DeLozier and I jumping off the bow

When I got in and started to swim, the river was smooth.  It felt good and the temperature was lovely.  We hit chop around the two hour mark I think.  It was not terrible chop and I was so happy that everything else was going well that I didn’t even care.  One thing I will say was that I was tired.  I remember thinking, my shoulders are just going to unscrew from my body.  The week was catching up to me.  I was tired, achy and the fear of this stage had taken some of my energy.

Around 3 hours into the swim I got a shooting pain  from my elbow down the back of my arm.  This could not continue.  At the next feed I stretched  it and told Margrethe I was tired. She told me I was doing great and away we went.  We passed Yuta on the way and after a cheer and hello we continued on.  Then we caught up to John and said some “hellos” to him and Alex.  After that, Margrethe and I were alone until….ta-dah… 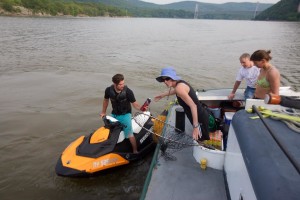 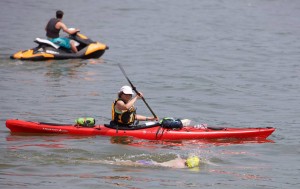 Andrew came up along side of me and was paddling next to me.  Like magic he knew just when to get there.  The chop picked  up and I was losing my battle with it.  This stage needed to end.  I stopped for a feed and told Andrew that  I just wanted  to jump on  the board with him.  I thought, “yeah.  We could paddle around  together.  Check on everyone.  Talk about stupid stuff and laugh and my shoulders wouldn’t hurt.”  But as soon as I told Andrew my idea of jumping on that board, he said that was  his cue to leave.  He knew all too well how great that temptation was from my point of view. 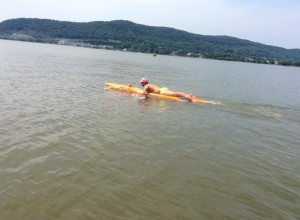 Andrew to the rescue

Once Andrew left we made our way around a turn where we could finally see the bridge.   Side note:  I looked up.   Big, big mistake.  Andrew told me not to look up.  Margrethe told me not to but I just couldn’t help myself.  I looked, I saw it and I knew I was in trouble.  By my calculations, I still had about 4 feeds to go (2 hours).  This was bad.  The bridge was now on my mind and each minute of not getting my feed felt like an eternity.

At some point Rondi jumped  in with me and we swam together.  I was grateful for the company.  She told me once I saw the lighthouse to my left, that the bridge was about a half mile away.  I couldn’t see any lighthouse and the  bridge did  not seem closer.  I put my head down and  just swam.  My shoulders hurt, my right hip hurt, my neck ached but I just thought that if I kept moving my arms I would get there. 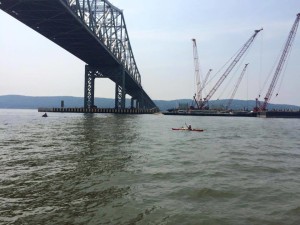 Margrethe and I approaching Tappan Zee

Well, I finally saw the lighthouse and that 1/2 mile felt like it was about 1 1/2 miles but eventually, Margrethe and I conquered another stage.

I wish I could say that we slayed the beast – that we fought through ridiculous conditions and made it to the other side of the bridge alive and well.  In truth, the beast was sleeping.  It was still 19.8 miles.  It was still a 6+ hour swim and  it was still hard but the alternatives could have been worse.  Today was a  day of buoyant optimism.  The beast will always be known to me as the gentle giant who let me swim through the day virtually unscathed.  Tomorrow is another day.   The day of Controlled Chaos is what I am calling it.  I do not know what to expect, but whatever is thrown at me, I will try to control as best I can.  It may be like trying to catch dust in my hands but I’m gonna try.