Ever since I started even contemplating the 8 Bridges swim, I have always assumed that stage 5 was off the table. The guidance suggests a minimum 3 hour pace of 27 mins / mile, and I’m generally nowhere near that, hovering at best at around 29 mins/mile. So when we set off on the stage yesterday, I wasn’t feeling particularly optimistic…and in fact, I was secretly harbouring the assumption that I would get to 6-7 hours, it would become obvious that I wasn’t going to finish and I would get out, saving myself for the later stages. It is nicknamed “The Beast”, but I decided that this was too macho and intimidating for me, so I renamed it “The Kitten” – small and feisty, with teeth, claws and an indomitable spirit, but ultimately small enough to pick up and put in a box out of harm’s way.

It was a beautiful, calm day from the start, and the stage started well with the opportunity to leap from the front of Launch 5. Anyone who’s read my blog, The Long Swim, will know that for me, these annual leaping pics are an enormous source of vicarious pleasure, oozing pleasure and confidence in and around the water. To have a picture of me doing that same leaping is a source of enormous delight. 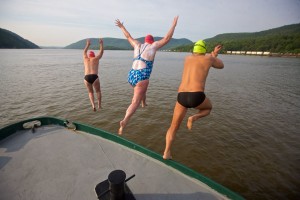 And after the leaping, the swimming. The previous day’s rest day had helped with recovery, and I enjoyed a steady-paced swim along the wide stretch of river. The water was generally calm, and even starting a couple of hours before the turn of the tides to get a jump on the distance gave a much better sense of progress than I had expected. My feeds slipped down well, and my body was tired but pretty much in one piece. And I always had the comfort that I wouldn’t get anywhere near making the swim and would be able to get out once everyone was sure I wouldn’t make it.

But the time trundled on and we continued to progress, and the Tappenzee Bridge, and the construction for the new bridge littered around it, slowly crept into view. I was still sure I wouldn’t make it, but it was also tantalisingly there and a grumble of determination finally stirred. And then came the news that I was 2 miles away and that I could make it if I put my head down. I cursed and for the first time that day, decided to commit to the challenge. It was a painful, stressful hour, full of the uncertainties of an unknown, and likely very close, outcome, as well as the discomforts of fatigued muscles. Shouts from the kayaks and from the boats punctuated the effort, spurring me on and I dug down for as much energy as I could muster, shoulders burning, lungs heaving, stomach knotted. By this time, I had abandoned “The Kitten” and had reverted to “The Beast”, but with a choice expletive inserted for emphasis. It seemed appropriate. I also somehow got it into my head that I needed to be heading over towards the right, and contrary to all evidence, and the shouts and gesticulations of Pat, my kayaker, I bounced repeatedly and doggedly back to my deranged course, until Janet Harris appeared by my side, smiling and swimming gracefully, beckoning me towards her and onto a path that might actually get me where I needed to be. For this, and for her perfectly timed company, I am eternally grateful.

And slowly…oh….so….slowly….the bridge’s stanchions inched into the foreground, until finally they were by my side and I had completed Stage 5 in a time of just over 8 hours. This remains a total surprise to me, and a great pleasure. Without question, the excellent swimming conditions made it possible, and without those, I doubt that I would have managed to reach the finish before the turn of the tide, which was only a matter of minutes away when I finally crossed the line. But if I’ve learned nothing else on this trip, it’s that you have to take the good luck when it comes. So there it was – stage 5 completed, against every one of my expectations.

Perhaps I should learn to be more ambitious and should never have written it so thoroughly off in the first place; but the surprise of finishing is lovely, and has been one of the highlights of this swim adventure for me. 100% of the day’s swimmers crossed the line, with me bringing up the rear; that’s what I call a result.

Many congrats to all of my fellow swimmers, and heartfelt thanks to everyone who worked to make this most memorable of days possible.