The Day of Positive Predictability

I woke up feeling pretty good.  I think, mentally, the though of doing 13.2 miles after the monster of the previous, was very appealing.  I thought this would be a good day to take it easy.  I had heard it was not so bad of a stretch.  Once we arrived at the meeting place, everything, as usually, seemed to move pretty fast.  The weather was not great, overcast and a bit of wind.  I didn’t even care.  I think I would have been surprised if the sun was out.  We made our way to the bridge on Launch 5.  It is funny how different the bridges look from when you swim under them, to the next day when you are looking at them from out of the water.  I always ask, “is this it? is this the bridge?”  What is wrong with me, of course it is.  Why would we be there?  We jump in, Rondi gave the countdown, and off we went.  In the beginning, the kayakers were not with us.  We swam for about 5 minutes or so without them but it felt like a lot longer.  Margrethe, my kayaker, is my other half and without her, I feel lost on the water.  She navigates for us and these swims are all about navigation.

Before we met our kayakers, Anna and I swam together.  It was nice having her swim next to me but that was short lived as I veered off to the right and I watched her slowly fade from me.  Margrethe caught up and just as she did the chop started.  Not terrible chop like the day before, just annoying.  Anna loves the chop, she excels in the chop.  Chop, for me, is like sporadic raindrops on my face–annoying.  You just want it to either pour or go away.  Swells I can do, chop…not so much.  As we settled in, it was clear that the day would be dreary and I started to get tired.  I knew if I dropped my stroke count Margrethe would think it was because I was cold.  I wasn’t cold.  I  could just close my eyes and fall asleep in the water.  I felt tired and achy. 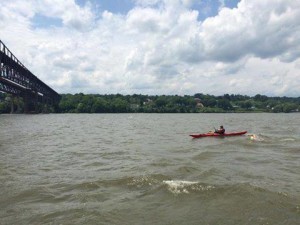 Feedings came and went and the day seemed to move in slow motion.  At one point, Anna and I came together again, Launch 5, our big boat was between us as we fed.  Once we started again, the water seemed calm but then…wait…I saw a cap.   Just like that John Humenik started pacing with me.  He came, as usual, just in at the right moment.  John is an incredible swimmer and an amazing support for 8 Bridges.  Seeing him in the water brought my spirits up.  The water picked up and was churning us.  For a moment, I thought maybe a big tanker or cargo ship was passing and creating waves off of the side but no, it was just what the water was doing in that place. 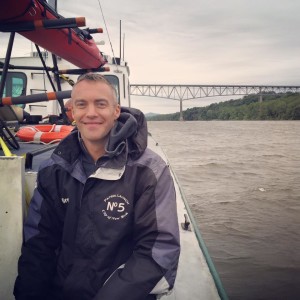 John swam with me for about 1/2 hour or so and then said his good-bye to pace with Anna for a bit.  After he left, my spirits sank and on my next feeding (the 8th one), I said to Margrethe, “I don’t see a bridge yet.”  She said, “you want to see a bridge, it’s right there, look to your right, it’s small.”  And there it was.  I had about an hour to go (one more feeding in a 1/2 hour and then I would be there).

The best feeling is swimming under the bridge.  It doesn’t come for the longest time then it creeps right up on your and you are there, swimming under it.  When you get to the other side, the swim is called.  Waters picked up at the bridge and I immediately swam over to the boat to get on fast.  After that, we cheered on the other swimmers as they came in and one by one, smiling faces got on the boat.  Everyone, I can assume, was having the same feelings: relief, satisfaction, joy.  As an aside, I finally got to meet and talk a bit with Jim, the other seven-stager that rounds off our group of 6.  He, as I imagined, is nice, personable and enthusiastic.  Katrina, the New Zealander, is swimming 5 of the 7 stages.  She is hysterical and really adds humor, and positive vibes to each day. 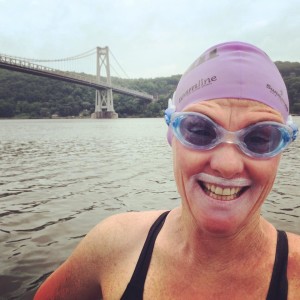 I would say the only predictable thing about the day was the distance we were swimming.  While I sat on the boat grateful to have gotten through another day, in the back of my mind, I knew Stage 4 would come fast.  We would have just enough time to get back to the hotel, shower, eat an early dinner and get into bed.

Karen Throsby and I went and had a really good dinner at an Italian Restaurant.  We ate until we felt good and ready to slowly leave.  It was comforting talking with Karen, listening to her about life, swimming, and general chatter.  Maybe it is because she is British or maybe because the next day would be the hump day of this journey, but as I laid in bed I could not help thinking of Churchill’s famous, this is not the end speech.  I said it in my head: “Now this is not the end. It is not even the beginning of the end, but it is, perhaps, the end of the beginning.”  With that thought, I took some deep breaths and tried to drift into a good night’s sleep.  I wanted to be ready for the day of Mental Insistence.