This is the one David Barra calls the ‘long-ass‘ stage – the one you really earn. Last year only four swimmers completed the stage due to the rough conditions; this year it is much calmer. A couple of swimmers from last year are giving Stage 2 another go, including Jamie Tout and Devon Clifford.  They seemed relieved at the welcome sight of still water and the sound of stirring chickadees this morning.

There is a process of warming up and greasing up before swimmers embark on Launch 5 to be transported to the stanchions of the bridge to begin the stage. The Brazilian group of swimmers, Flavio Toi, Harry Finger and Marta Izo, all use Vaseline and lanolin for both its insulating properties and to ward off chafe, 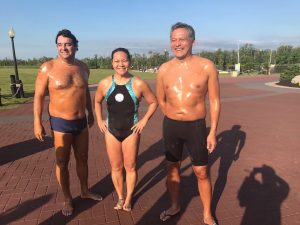 while yesterday’s lead finisher, Stephen Rouch covers himself in Butt Paste, the trade name of a popular diaper rash cream. This gives him the rather ghostly appearance of Batman’s The Joker, but it is effective.

So as the tide moved from flood to ebb, the swimmers took to the water. They must follow a narrow channel for this stage to stay in the current and the deeper water.

Both water and air temperatures were about 66 F, (17C) and this makes it difficult for the swimmers to keep warm. Having a hot sun on your back keeps body temperature up. The cold took a toll on a few swimmers yesterday. Katrin Walter of Switzerland huddled in the wheelhouse of Launch 5 soaking up the warmth before splashtime today. Yesterday she had found the conditions difficult, but she had finished, and today she was back for more, but sadly needed to come out after 90 minutes. Several others also exited the water today.

All the time, commercial traffic passes. Huge cement-carrying barges being pushed to Albany by tugboats cruise by, delicately avoiding the vulnerable swimmers. There are some lovely landmark lighthouses along the route today, and a couple of islands the kayakers must lead their swimmers around. And the most experienced of them sense the current flow and track right into it, so that our lead kayaker barely needed to paddle at some points. That’s the literal meaning of going with the flow. Up in the wheelhouse, there was much talk of Margarethe Horlyck-Romanovsky, a legendary kayaker who had an unerring sense of the river’s flow. She can’t be at the event this year, but she is much missed, much remembered.

The bridge came within reach and a fine misty drizzle descended. This didn’t help the swimmers when they exited, but we are hoping for fine weather in the Hudson Valley tomorrow.

There’s a new men’s record set by Stephen Rouch. His proud father, Stephen Senior, was there on Launch 5 to watch – as was Roy, father of the previous men’s record holder, Andrew Malinak. Stephen knocked 3.5 minutes off Andrew’s record, which Roy had also witnessed. This is testimony to the continuity and community of 8 Bridges.

Graco Marlan was next out of the water, followed by Abby Fairman who has really worked on speed this year. She was proud of her victory over John Hughes who was in next, and he was followed by Marta Izo and Flavio Toi. And happily, both Devon Clifford and Jamie Tout can claim to have conquered stage 2. Experience of completing two separate ice miles will have helped Devon deal with the cold.

The birdlife on the river is magical: herons and cormorants sit placidly on the channel marker buoys; bald eagles swoop down and hunt fish. And all the while the scenery runs from mountain to rolling, wooded hillsides. The train to Montreal salutes us hourly with its horn. 8 Bridges is very much underway.