The Day of Trepidation

I went to sleep feeling tired and a bit achy. I woke up feeling good.  This was a pleasant surpriseCould it be the CarboPro? I think so. We packed our bags, ate and headed to the meeting area.  Again, we boarded a bus to the start, unloaded then reloaded onto the boat. I sat in the wheel house because I knew our awesome captain, Greg Porteus, would turn the heat on for me. I was already concerned, no, down right scared, about the water. It felt warmer outside then the day before but it was windy on the water. I was hoping to feel that warmth I felt yesterday when I jumped in. Rondi gave the 15, then 6 minute warning. Where did the time go? We, the swimmers, at that point, were all huddled below deck so the kayaks could be loaded into the water. 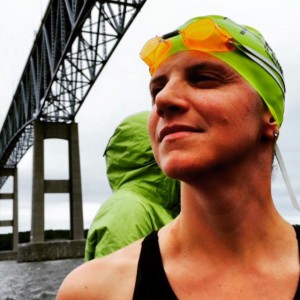 Me before the start – no clue what the day will bring

The kayakers and crew are an essential part of the swimmers’ team. They are our eyes and ears when we are in the water and they are constantly on high alert to make sure all the swimmers have the best chance of finishing. It is not holding the line (sometimes that’s impossible) but  staying on course and making adjustments as needed. It is a skill that makes them unique and essential.

Today was an excellent example of this unique skill that I mentioned. The wind was bad (sustained headwind at 15 mph with 25 mph gusts), the weather was bad, and the chop was unforgiving. The kayakers had to work through headwind all day. The chop was not my battle today. The chop was hard but not a breaker for me. I felt good, I felt strong. My battle was the cold. Around 2 hours into my 6 ½ hour swim, the cold crept in again. I, responsibly, told my kayaker I was feeling cold. I say responsibly because I thought about keeping it to myself and just monitoring myself for signs of hypothermia. I am lucky I told my kayaker. She asked if I wanted warm feeds, I didn’t want to have to bother the crew to get them to her but “yes. Yes, I need warm feeds” is what came out. The next feed was warm water mixed with my CarboPro. Those warm feeds, and the experience of my kayaker saved the swim.

The cold did not go away but it did not get worse.  I did not start to feel the signs of hypothermia, the cold was kept at bay.  After the second warm feed, I realized the cold would not go away so now it was a mental game. Chop let up sporadically and little throughout the day. We were fighting.  Mother Nature did not want us in her waters today. With each 30 minute feed that I took, I got the warmth and a burst of enegy. I knew the record was 5 hrs. 30 mins. So I had added an extra hour and calculated that I would need to go through at least 11 ½ hour feeds before the finish. Once I got to the 6th feed, the count down began and I did everything to hold off the cold thoughts that were invading my mind.

Feed 9 took the longest to get to. I looked up for the first time and saw the bridge but, no…I wasn’t going to fall for it again. I ask my Kayaker, Margrethe, “is that the bridge?” I kind of knew it was but I wanted to make sure. She confirmed so I cautiously said, “so about 3 more feedings (translated – 1 ½ hours)?  She responded “I think we can do it in two.” With that, I started to turn it over fast (or at least I thought fast) with a burst of energy. The second of those two feeding landed us right before the walking bridge. There is a walking bridge before the Mid-Hudson bridge. These bridges are about ½ mile apart. They feel like they are 1 ½ miles apart. I took a final feed between the two and not long after I swam under the bridge. The cold didn’t even bother me as much as it did yesterday when I ended. I was so happy the mental battle was over, I finished feeling strong and was grateful to get on the boat to eat the cookies I was thinking about during the last 4 miles.

Anna was toweling herself off and we gave each other a hearty hug. Besides my kayaker and the crew that day, she, and her kayaker Lynn, also aided in getting me to the finish. I am not sure what mile but I believe around 3 ½ hours into the swim, Anna and I were together. As week took our feeds, I saw her on the other side of my kayak but she did not see me. My spirits rose. To see another swimmer feels so good sometimes, good for the psyche. I knew she would be leaving me…passing me…I gave a shout of “go Anna go” or something to that effect. Anna is a beautiful, powerful swimmer so I’m not so sure she needed that but I know I did and it felt good to get her smile before we took off again. 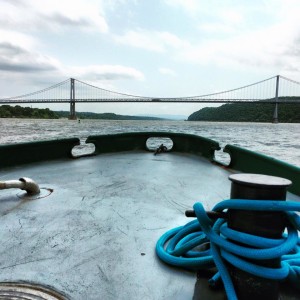 Getting on the boat and anxiously awaiting the other swimmers to come in felt good but hearing swimmers dropping out or getting pulled tugged at my heart. You never want to hear about swimmers getting pulled.  You feel it for them.  Not as much as they do but you understand.  It was a brutal day and most got on the boat in good spirits – they were saving themselves for another stage, or the cold crept into them as well, or they wanted to get to a certain point and they did so they were ok with it. Whatever the reason I know it still hurts. I’ve been there and I have not ruled out the possibility that it could happen this week. Not because of the miles, I feel they may be ok for me. My coach has trained me well. My battle will be the cold. I won today…tomorrow is another day. That is what this journey is about for me. Seeing what I can get through and learning my weaknesses so I can improve for the next swim. Tomorrow is another day. It is predicted to be an easier day then today so maybe tomorrow will be the day of Positive Predictability. 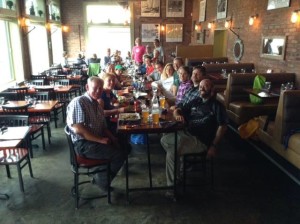 Swimmers and Crew enjoying dinner after a monster day