The Day of Mental Insistence

The sun was shining!  It was beautiful.  We made our way to the train station (the finish) then took the train two stops to the start.  I was going home to rest after this stage.  My spirits were high.   I was going to see my husband and my kids.  I missed them so much.  I would think about them on the river as I was swimming down.  I try not to think about anything but it was hard to not have them make guest appearances. 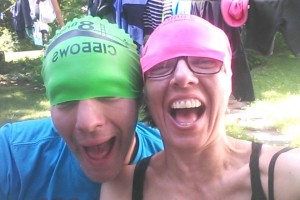 I made sure I put extra sunscreen on and wore my Arena polyester suit, hoping to hold in as much heat as possible.  I listened to music, I was readying myself.  I was ready for this stage.  The sun gave me a boost.   It is amazing what a little bit of light can do to the soul.  We jumped in at the start and we were off.  The water was calm, beautiful calm.  I could see Margrethe to my left but the sun was so bright I could only make out the outline of her. That was fine with me, I was not going to complain.  I calculated I had about 9 feedings until the end of the stage and if the weather and water cooperated, my calculations would be right on.

We pushed our way down the river.  The river was slack when we started and she told me I was doing 20 minute miles.  I felt good but was not sure I could keep the pace I started with.  I was a bit too excited in the beginning.  around mile 7 we hit a really cold patch of water.  It remained cold for a while and I told my mind that this was going to be the temperature for the rest of the day but then I hit a pleasant warm patch.  This is how the day went, cold then warm.  It confuses the body and mind.  Just when the body starts to adjust for the temperature change…bam…it has to adjust again.

I didn’t care about the patches, I was so happy the sun was out and the water was calm.  Around 2 1/2 hours, Rondi jumped in and paces with me.  She remained with me for about 1 hour, possible 1 1/2 hours.  Rondi is a beautiful swimmer.  Even swimming next to her, I could see her effortlessly gliding through the water.  You can see she was meant to be in it.  She understands the feel of it.  Rondi, along with David, have an enormous amount of logistics to deal with when it comes to this 8 Bridges Hudson River Swim event.  Maybe it was the beauty of the water and the sun that pulled her in today, but whatever the reason, to swim next to her is always an honor. 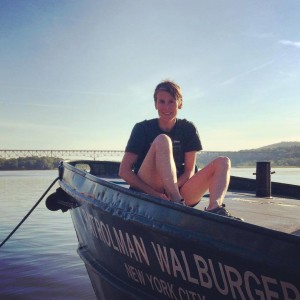 When Rondi left me, I was starting to get tired.  I took another feed and asked Margrethe about the bridge.  I couldn’t help myself.  She told me it was just around the bend.  I put my head down and went.  When I picked up my head for the 8th- 1/2 hour feed, she told me: “the bridge is right there.  You are 20 minutes away from the record.”  I said, “am I that close to the bridge.”  It really look further than 20 minutes to me.  Maybe she wanted me to finish strong, maybe she thought I could do it; whatever she thought, her words of encouragement worked and I put my head down and swam hard to the bridge.  I knew I was swimming longer than 20 minutes but it felt nice to feel the shadow of the bridge under me and hear Captain Greg Porteus sound his horn that I had finished.  I was going home.  I was going to see my family.  Even if it was for only 12 hours or so, it was worth it.  I would sleep well in my bed.  I would try to sleep in if I could.  I would hold and hug my family.  I would probably cry a little.  The day of mental insistence had come to an end and I made it through.  I will try to put the reputation of stage 5 out of my head.  It is nicknamed “the beast.”  I am hoping instead, stage 5 will be the day of buoyant optimism.