The Day of Controlled Chaos

When I walked into my friend’s apartment, after stage 5, I looked like I had been beaten with a baseball bat (or at least that is how I felt).  Janine was swimming Stage 6 but immediately she brought me in, fed me, made me take a shower (god I needed it) and gave me two advil PMs.  With both shoulders icing, I fell asleep.  It was the first time I slept through the night all week.  I woke up feeling refreshed and ready to go.  We were catching a train that would get us to the meeting place a good 15 minutes before we needed to be there.  Things were good, but then…

We got to the start and Launch 5 was pulling away.  For a moment I panicked.  I thought that maybe I could do a runner and jump onto the boat like they do in the movies; however, this plan would have never worked since the boat was taller than the dock.  I would have ended up smacking into the side of the boat and falling into the water.  I waited to hear plan B.  We were to get on the zodiac (another support boat).  As we sat on the zodiac, me huddled on the floor, I finally noticed the weather and felt the rocking of the boat.  The day look ominous…a day when you look at the water and it looks creepy.  The water was sloppy, it seemed to be moving us in all directions.  Just when I thought things could not get better, I felt little pelts of rain on my face…awesome. 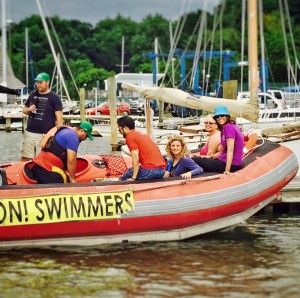 Zodiac Ride here we go with Hannah and Janine

The zodiac made it’s way down the river a bit to the start and we quickly docked to do some fancy kayak maneuvering onto and off of boats.  By the time we met up with Launch 5 I was feeling sick.  I turned to my right to make sure I had space in case I needed to throw up over the side.  I thought we were going to board launch 5 but, no sooner did they give Margrethe her kayak skirt, we were untied and sped away.  I thought about doing another runner but again, I would have just hit the side of the boat and bounce off into the water (the zodiac sits much lower).  I looked to Hannah who was trying to be encouraging by saying, “look at the sun shining over New York,” and I said to her, “please ask them if we can get on the boat.”  The next go around, we boarded launch 5.  I was full-on sea sick and Anna was NOT doing well either. 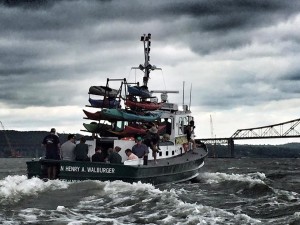 Ominous before the start of Stage 6

Getting ready and waiting

After a flurry of activity and a great deal of excited chatter on the radios, we jumped in, Rondi gave the count down and off we went.  I love big rolling chop and we had a tailwind with us!  Once I got comfortable and settled into my stroke Margrethe and I were surfing the waves and it felt good.  The sun came out and I felt that push down the river.  Maybe the river finally wanted to play nice, or maybe she wanted to spit us out…whatever the reason I didn’t care.

We had made it out of the controlled chaos, that was base camp at the Tappan Zee Bridge, to the George Washington Bridge in record time.  Everyone was smiles with the exception of Anna who finished the stage in amazing time but who was approaching the seriously ill stage. 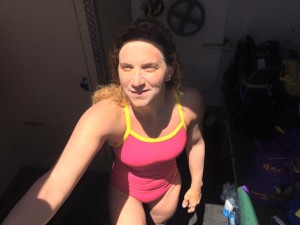 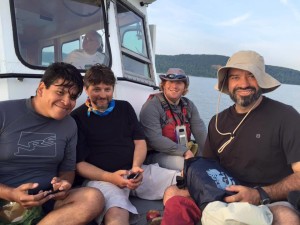 The day started out dark and chaotic with lots of s#its and Fu*ks but ended with hugs and pats on the backs.  Everyone celebrated with dinner at the dock.  I was happy to see my family and friend who made the journey into the city.  I was happy they got to meet my, now, extended swimming family– but the twitch in my stomach was not quite gone.  We had one more stage to complete. Stage 7 was one I had been dreading.  The warm spots down the river were going to come to an end.  I needed to get mentally prepared for the cold and physically prepared for a 6 hour swim.  I was tired.  I was nervous but I was going to fight for this one.  I already knew what this last stage would be called if I actually made it this far – Stage 7 was going to be the day of fierce determination.